CRISPR has been a revolutionary method in molecular biology that enables faster and more efficient gene editing than ever before. Unlike previous methods such as zinc finger nucleases (ZFNs) and transcription activator-like effector nucleases (TALENs) that relies on protein-DNA binding to induce double stranded cuts in the genome, CRISPR-Cas9 acts on the principle of RNA-DNA binding, where a single-guide RNA binds with the gene loci of interest. Once the cut is made by the Cas9-endonuclease, the cell has a natural repair mechanism known as non-homologous end joining (NHEJ) [1]. During a repair event, DNA polymerase randomly inserts or deletes nucleotides to ligate the two cut ends. Despite the promising applications of CRISPR and ease of gene knockout in vitro, selecting a high efficiency gRNA remains a challenge that limits clinical translation. Here, we proposed a guide RNA design that contains C in its “seed” sequence, a GC content from 40-60%, an A-rich middle with no polyTs to target green fluorescent protein. We showed that the gRNA design led to a knockdown of more than 50% of GFP in E. coli in comparison to colonies that express GFP but no gRNA. The percentage knockdown was quantified using fluorescence spectroscopy with an excitation wavelength of 488nm. Optimizing for a highly effective gRNA design is a stepping stone to advance CRISPR’s basic and biomedical applications.

Having an efficient guide RNA design with high binding efficiency serves many important roles in both basic and clinical applications. Knockout experiments are important in assisting the studies of gene functions by elucidating how the loss of the gene (or the protein encoded) perturbs certain biological pathways. For instance, Kim et. al demonstrated that knockdown of the Sirt1 gene in zebrafish caused genes such as IL-1b, IL-6 and TNF-α to be highly expressed [2]. Knockdown of the Sirt1 gene also showed that lack of Sirt1 led to chronic inflammation and intestinal atrophy, increasing pro-apoptotic events, which ultimately increased the lifespan of zebrafish [2]. A simple knockdown experiment using CRISPR-Cas9 with effective gRNA design can reveal meaningful biological insights that would have been expensive and difficult to achieve with previous tools such as TALEN or ZFN. Furthermore, CRISPR technology goes beyond gene knockout, with a plethora of Cas proteins being developed, such as dead-Cas9 (dCas9), or catalytically inactive Cas9 protein. Although dCas9 is unable to induce double stranded cuts, it can be used to overexpress or downregulate genes when fused with transcription factors such as VP64 or KRAB, respectively [3]. For instance, the dCas9 system has been utilized in tissue engineering applications, such as activating Sox9 and inhibiting PPAR-γ in BMSC to activate chondrogenesis and repress adipogenesis, thereby directing differentiation pathways towards chondrogenesis [4]. In spite of the diverse arrays of Cas proteins and their applications, ranging from genomic screens to genome-scale genetic to cell fate regulation, an indispensable common denominator that enables the success of these experiments involves a guide RNA design with high binding affinity. Last but not least, Zhang et. al developed diagnostic systems such as SHERLOCK that releases fluorescence signals once the gRNA binds with the desired genomic loci of a pathogen [5]. Hence, efficient gRNA designs are key in improving the signal-to-noise ratio for diagnosing diseases, especially in point-of-care applications in rural regions of the world. All in all, an effective gRNA serves as an important component in any CRISPR experiments ranging from studying biological pathways to treating and diagnosing diseases.

We hypothesize that a gRNA with C in its “seed” sequence, a GC content from 40-60%, an A-rich middle with no polyTs will lead to more than 50% of GFP knockout. To test efficacy of the gRNA, we will transfect the GFP-containing plasmid and the CRISPR-Cas plasmid with the gRNA into T7 competent E. coli colonies [Figure 1]. As the gRNA and Cas9 protein are expressed, they are expected to bind and knockdown the GFP gene. Hence, the experiment is successful if more than 50% of fluorescence is lost. Using fluorescence microscopy, the loss of fluorescence in the experimental colonies versus positive controls that only contain pGlo and no gRNA can be quantified.

Several factors need to be taken into account to design an optimal sgRNA. A sgRNA contains a “seed” and “non-seed” sequence. The “seed” sequence often refers to the 5 base pairs proximal to the PAM sequence [6]. Many studies have shown that having well-defined seed sequence with high binding affinity (containing at least 1-2 Cs) leads to more specific Cas9 binding [7]. Another chipSeq assay by Wu et. al and Jiang et. al shows that despite having a short high-affinity “seed” region means Cas9 can bind to multiple genome loci, cleavage does not occur, decreasing the amount of off-target effects [8,9]. Based on the aforementioned principles, we designed our gRNA to contain at least one cytosine in the seed region. Other studies also suggest that having dispersed Adenines in the middle of the sgRNA can lead to higher specificity [10]. Further, gRNA with too low or too high GCs content tend to be less active [10]. In other words, we don’t want the gRNA to have such low binding affinity that it is not effective, but not too rich in GCs that activity is low especially in the case of low CRISPR-Cas9 concentrations. Hence, the design aimed to have a GC content of around 40% to 60%. As PAM sequence is critical for specific gRNA binding, it should not be adjacent to multiple Gs which can lead to undesirable binding of the sgRNA (e.g. NGGG). Finally, avoiding polyTs (4 or more Ts) will lead to enhanced gRNA activity since more than 4 consecutive Ts can cause the polymerase to prematurely terminate gRNA transcription. 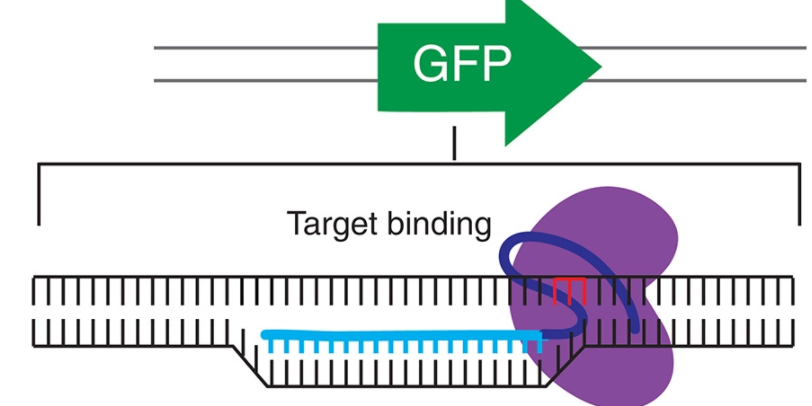 Figure 2. Binding of gRNA in the CRISPR-Cas9 system to the target GFP gene [11]

BPK764 plasmid is linearized using BsaI‐HF and dephosphorylated using the Quick Dephosphorylation kit. Before the purification step, the dephosphorylated digested BPK764 needs to be incubated on an 80oC thermoblock to heat-inactivate the Alkaline Phosphatase, Calf Intestinal (CIP). The linearized-dephosphorylated BPK764 backbone can be purified using the GeneJet Purification Kit (Thermofisher). After mixing BPK764 with crRNA insert in 10x T4 DNA Ligase Buffer, Nuclease free H2O, and T4 DNA Ligase, the sample is incubated at 65oCfor 10 minutes and validated for the successful incorporation of crRNA by PCR sequencing. Five microliters of each ligation where transformed into 50Lof 5‐alpha competent cells with heat shock methods. Four groups of cell aliquots are used water (negative control), undigested BPK764 (negative control), 20 fmol ligated vector (positive control), and 60 fmol ligated vector (positive control). S.O.C medium is used for heat shock recovery along with shaking for 30 minutes to 1 hour. The four samples are plated on  LBCm agar (agar contains 25ug/mL Chloramphenicol). As only plasmids containing gRNA are resistant to Chloramphenicol, seeing colonies indicates that the gRNA has been successfully incorporated into the colonies. Five colonies are picked for each ligated vector LBCm agar plate  and let grown overnight in two cap tubes at 37oC. Plasmids are purified using MiniPrep and sequenced for validation. The final plasmid that contains the crRNA should resemble Figure 3.c below. 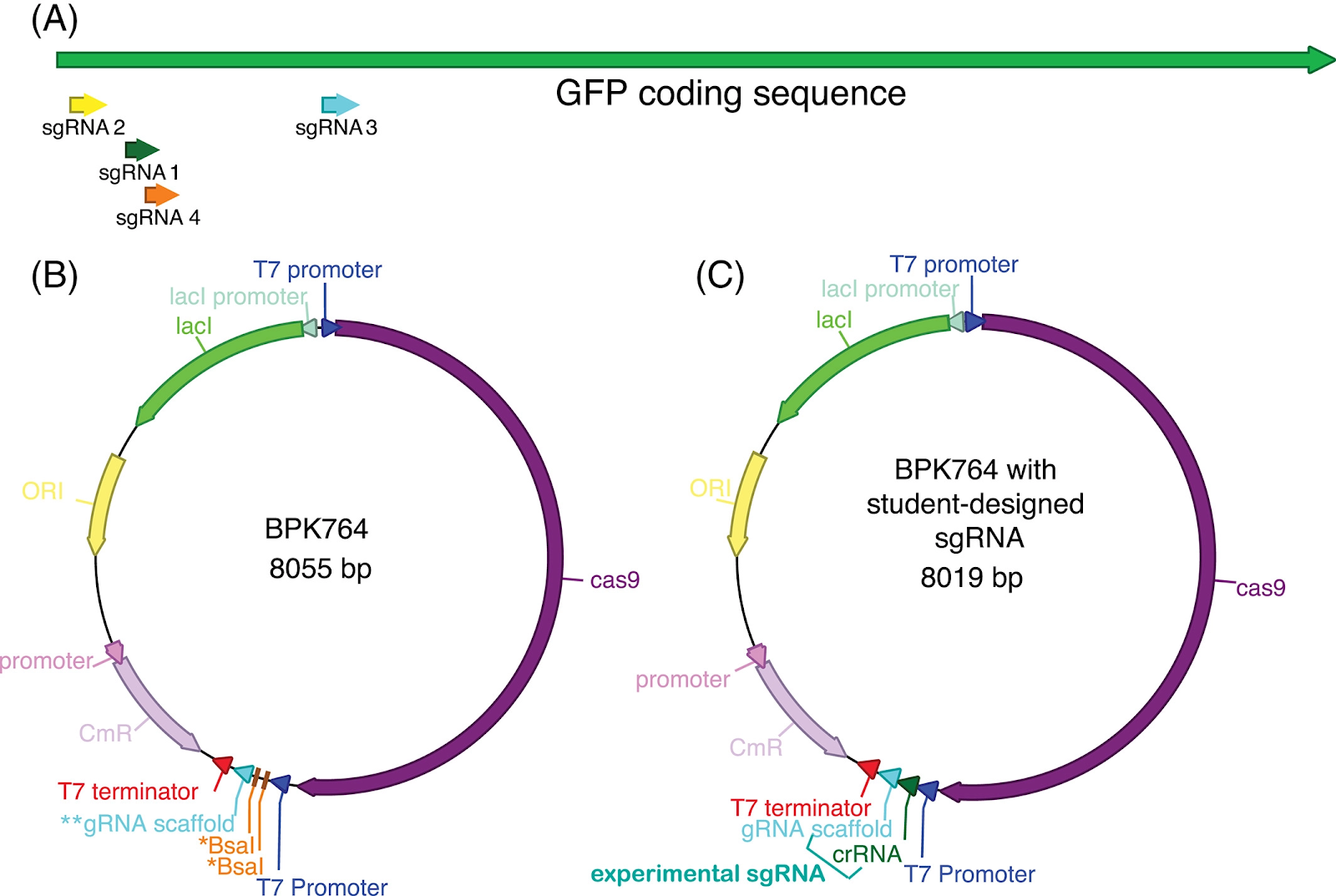 Figure 3. (A) The GFP sequence that is complementary to the sgRNA. (B) The BPK764 backbone with two BsaI restriction cut sites that are used to insert the  duplexed crRNA oligonucleotides before the sgRNA scaffold. (C) The BPK764 plasmid once the crRNA are ligated.  T7 promoter drives the expression of GFP, sgRNA, and Cas9 gene. Other features include chloramphenicol resistance gene (CmR), origin of replication (ORI), lac operon regulator, and lac repressor (lacI) gene [11].

Fluorescent microscopy with 488nm excitation filter is used to take an image of four colonies on each plate at a magnification factor of 5X. The image will allow us to evaluate the amount of GFP fluorescence after the CRISPR-mediated gene knockout experiment. The percentage of loss of fluorescence can be calculated by subtracting the number of colonies with fluorescence divided by the number of total colonies. As the crRNA binds with the GFP sequence in the pGlo plasmid, successful knockout is achieved where the amount of fluorescence in the gRNA sample is significantly less than that of the positive control, which contains only pGlo and no gRNA.

Thank you to Margaret Ho (The Schoichet Lab) and Dr. Michael Garton (The Garton Lab) for giving me guidance on the project!